It arrived! After more than a year of claiming I was going to build a quadcopter/drone, I finally ordered the parts to do so. The plan is to build a quadcopter using off-the-shelf parts, but instead of buying a flight controller I will use a Raspberry Pi 3B and attempt to write my own flight control software. This is likely to take a long time and I plan to document my progress here. My only experience with quadcopters is having a go with a small one (a Syma X11C) and I’ve never studied aviation.

It feels like it should be straightforward to write the software to make a quadcopter hover: given input from some sensors (accelerometer, gyroscope), output signals to motors to try to maintain the current position and angle, i.e.run all the motors at some speed and if the sensors suggest that one side is dropping down, increase the speed of the motor(s) on that side. I am certain that it will be more complex than that but half the enjoyment of this project will come from finding out how and why.

I’m pretty excited to get started. The first stage of the project will be putting all the components together which is like getting a new Lego kit. The next will be soldering the electronic components together and exercising my electronics interest. The last will be trying to write some code to make the thing fly, which is something I’m looking forward to a lot.

A while ago I ordered a Sense HAT for my Raspberry Pi because it contains an accelerometer, a gyroscope, a magnetometer (compass), a barometer (for altitude) as well as a hydrometer and a thermometer. It also has a super cool LED display. This seemed like a very convenient way of getting the sensor inputs I thought I needed, though it remains to be seen whether it will be sufficient. My main concerns are the speed and accuracy of the sensor data.

I had considered buying just some of the parts initially just to see whether I could get a motor to run. However, when I started adding up all the bits I would need just to do that, it seemed to make sense to just order everything at once. The motors generally used for drones of the size I was thinking seem to be 3-pole brushless motors. Due to the power requirements of these motors, it’s not possible to run them directly from the Raspberry Pi outputs. For this reason, and the need to generate accurate sequences of pulses to the three poles to make the motors turn, Electronic Speed Controllers (ESCs) are used. These devices take a higher voltage power input (generally from a Lithim-Polymer (LiPo) battery) and a signal input (e.g. from a flight controller) and generate the three signals required to drive a motor at a particular speed. Along with a motor therefore, I would also need to buy a speed controller, a battery (or a good bench power supply, ESCs can draw 30A or more) and a battery charger, just to make a motor turn. This drove my decision to buy the four motors I’d need, four ESCs, a battery, a charger, a Power Distribution Board (PDB) with a Battery Elimination Circuit (BEC), propellors and a frame to hold it all together.

I ordered from Unmanned Tech Shop as they had everything I thought I needed and for a reasonable price. 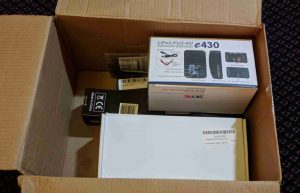 Inside the box were the following bits:

I will go into more detail about the components in later posts as I come to use them, but for now I think I might just about have everything I need to make something that can fly! 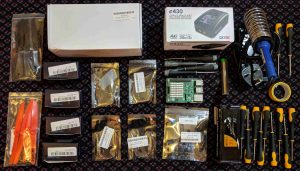