The first thing I could do to play with the new bits I had bought was to charge the battery. 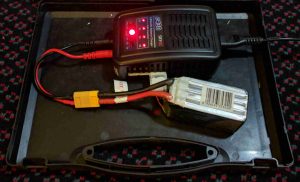 I had read a little bit about batteries before making my order. There are a number of specifications to look out for. Firstly there is the number of Ss. My understanding is that LiPo batteries are sold with different numbers of cells, with each cell producing 3.7V. Thus a 4S battery like the one I have bought produces (4*3.7) or 14.8V. According to this, the S stands for Series and it sounds like you can also get batteries with more cells wired in parallel at the same time (which would increase current at the same voltage). Motors and ESCs seem to be able to handle a range of voltages, and the higher the voltage the more power and thus thrust you can get from a particular motor/propeller combination. When looking around, it seemed like people used either 3S or 4S batteries with the size of quadcopter I was planning on building (~250mm, though I’ve bought a 270mm frame), so given that one of the comments I’ve received is “Isn’t a Raspberry Pi a bit heavy for that?”, I thought I’d go for the more powerful option.

There are other numbers that are relevant after choosing a voltage: capacity (measured in milliampere hours (mAh)) and C rating (coulombs, presumably), which refers to how fast the battery can discharge its energy. The higher the capacity, the longer the battery will last when using the quadcopter, but the battery is also likely to be bigger and heavier so it’s a trade-off. Unmanned Tech Shop suggested on one of their product pages that a 1300mAh – 1550mAh battery was suitable for a frame about the size I was looking, though I can no longer find that page (they all seem to suggest 1300mAh now), so we’ll see what happens. As for the C rating, I’m unsure of how to calculate what’s reasonable for a particular quadcopter. The one I got is 75C (which I suppose means it can deliver 75A/s, so at 14.8V that’s 1110W.. really?) but I don’t yet know if it was necessary to get that over the more common 45C batteries. The one I got seemed to be a good compromise between the different specifications and price.

The chargers require to charge LiPo batteries are known as “balance chargers”. As well as having a power output to charge the battery, they also have input sockets which you plug the battery into so that the charger can tell how charged the individual cells of the battery are. I assume that this is important because lithium batteries can sometimes catch fire and so even charging is good for safety. Some chargers also have an input for a temperature sensor to make sure that batteries do not overhead, although mine does not, so I’ll only be charging it while I’m in the room. The charger I bought can also charge at 1A, 2A or 3A. The higher the current, the faster that battery will charge, but it depends on a battery’s charging C rating (different from the discharging C rating above) as to what it can safely handle. I wasn’t aware of this when I ordered mine, and the documentation is a bit confusing (the leaflet with the battery says 1C but the battery itself says 5C) so for safety I charged at 1A. From what I’ve read, you can work out the maximum charging current by multiplying the charging C rating by the battery’s capacity, so if it’s a 1000mAh battery with a 1C charging rating, you can charge it at 1A. If it had a 5C charging rating, you could charge it at 5A.

I didn’t time how long it took to charge that battery (and I’m unsure whether it came partially charged or not), but the charger seemed to do somethings, flashed some lights (to show it was discharging individual cells) and eventually showed a green light to show that the battery was ready.